What Is Ageing Right For You?

When I ask people what their physiotherapy goals are in their assessment, this is the question that I am asking – no wonder clients sometimes find it hard to answer!  It is deeply personal and often comes down to how we define ourselves as humans.  So, the answer will be different from everyone and the motivations that drive those answers will be determined by so many different things.

Due to the improvements to our environment in Australia over the years with stable housing, improved access to education and health care, growing old will affect more of us than ever before with Australians living on average to the age of 83.  Just for context, the average life expectancy in 1900 in this country was 47.

The process of growing older is a process that is to some extent genetically pre-determined, but it also has a lot to do with our lifestyle choices.  If a good day for you is a day spent reading a book and it does not matter to you if you require assistance for functional activities then physiotherapy is unlikely to hold any appeal.

If on the other hand you are like my client Alan, who had chemotherapy for pancreatic cancer then fell and suffered a broken neck (without spinal cord damage), being frail was not what he considered ageing right. In his younger life he had been a green beret and was in short, a lion of a man. I have never met anyone so determined to take control of his life.  He had no illusions.  He knew he was going to die of cancer, but he was determined to get stronger to live out his remaining months on his terms.  He hated seeing the worried look on his wife’s face whenever he got out of the chair.  He hated feeling feeble and afraid of falling. He was prepared to put in the work three days a week to reverse his frailty.

When we first started preparing for deadlifts, he was unable to maintain his balance in standing and bend 20 degrees at the hips.  By the time his secondary cancer appeared, he was deadlifting 12kg with ease from the floor.  He was walking with confidence and enjoying his life. He had a good quality extra 5 months where he looked forward to pushing himself to achieve new personal bests. Then came a short period of unwellness at the end. 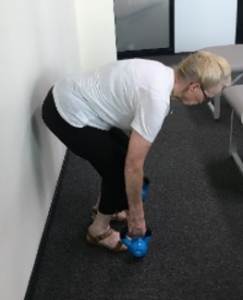 The deadlift is the back and leg strengthening exercise par excellence.  There are few movements that are more natural than picking something up off the floor – a capacity which becomes perilous with muscle weakness and frailty and leads to the need to use a pick-up stick.  (When I worked in a big public hospital in the geriatric wards, about 1 percent of my patients could lift a pen off the floor without falling forwards.) The deadlift is nothing more than this natural movement performed optimally with a load in the hands. It allows human beings to develop more force than any other exercise.  So if you need to get stronger fast, it is a go-to exercise!